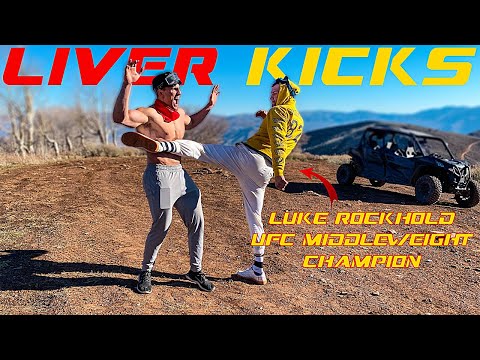 Rockhold, who once held the middleweight title in MMA’s number one promotion, was begged by social media star Houston to hit him with one of his famous kicks to the liver, and he happily obliged.

The pair met up in Utah to record a video in which Houston could show off his strength by taking a body blow from one of the most fearsome strikers in the UFC.

But he was crippled by the kick almost instantly, despite Rockhold likely not hitting him with his hardest shot.

The pair laughed off the brutal kick before Rockhold threw two more soft ones for the sake of showing off technique, the second of which sent Jones to the floor again.

“Once you touch the liver, once it’s hurt, it does not take much to get through it and penetrate it,” Rockhold said in the video.

“You know you’ve got him in the liver so you see the guy crumble and break and all you’ve got to do is touch it.”

Jones, who is known for taking severe punishment in the name of his YouTube videos, had previously been tasered by former UFC light heavyweight champion Chuck Liddell.

And he claimed that he would rather be tased again before taking another kick from Rockhold, who will return to action for the first time since 2019 next year.

Asked which was worse between being hit by a liver kick or a taser gun to the back, Jones replied that they were “different”.

“I’d rather be tasered,” he said. “It’s a sharp pain that makes you keel over and wonder why this happened and what decisions you chose to get to this moment.

“You ask yourself ‘where did I go wrong, and/or right?’ Needless to say, I don’t recommend it but that’s why I’m here though, you’re welcome.”

What would it take for you to take a liver kick from a UFC fighter like Luke Rockhold? Let us know your thoughts in the comments section below!

And after recovering from the brutal knockdown, Jones declared himself “the world’s strongest living being”, joking that anybody else who took that shot would not have recovered.

“I think I proved my point,” he continued. “I came here today with a mission, to once again prove that I’m the world’s strongest living being.

“And I think I was successful – anyone else taking a liver kick from Luke Rockhold, they’re dead, still in that garage.

“But look at me, standing here, training my liver some more with some whiskey here.

“Biggest takeaway here is I’m strong, and that’s all I have to say.”

Rockhold was set to make his return to the octagon last month to face Sean Strickland at UFC 268 in New York, but was forced to pull out with a herniated disc.