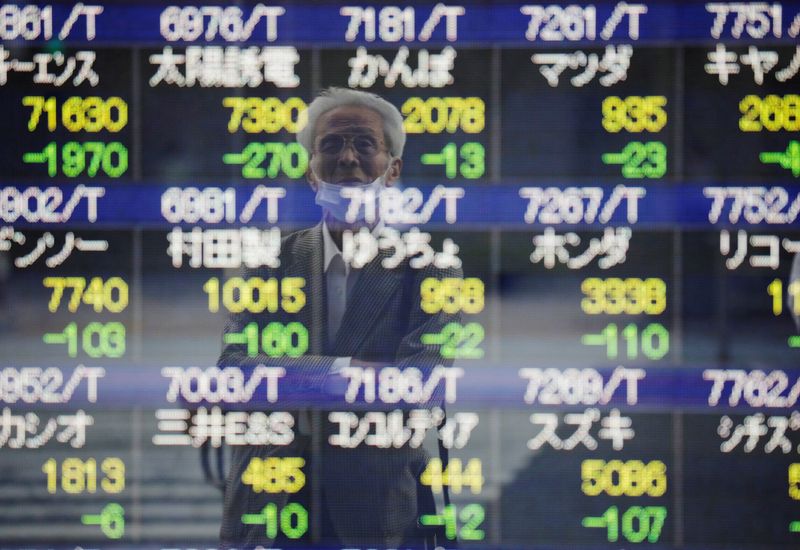 © Reuters. FILE PHOTO: A man wearing a protective mask, amid the COVID-19 outbreak, is reflected on an electronic board displaying stock prices outside a brokerage in Tokyo, Japan, September 21, 2021. REUTERS/Kim Kyung-Hoon

By David Randall and Tommy Wilkes

NEW YORK (Reuters) -Global stock benchmarks and oil prices fell on Friday while safe havens such as the dollar and Treasury bonds rose as investors wrestled with a hawkish turn from major central banks in the fight against inflation and rising numbers of Omicron cases.

“Central bankers have delivered a hawk for the holidays. The balance of 2021 will be spent focused on the ramifications from Omicron and any associated restrictions and/or delays in the return to normal,” said Ian Lyngen, head of U.S. rates strategy at BMO Capital Markets.

MSCI’s gauge of stocks across the globe shed 0.78%.

U.S. stocks have now reversed all of their gains from Wednesday, when markets welcomed the Federal Reserve’s commitment to tackle rising inflation with faster bond tapering and interest rate hikes next year.

The hawkish tilt from central banks this week including the Fed and Bank of England, and to a lesser degree the European Central Bank, was initially greeted by a wave of buying from investors confident policymakers will curb higher inflation.

But the mood has since turned gloomier as traders fret that markets pumped up on cheap money are vulnerable to even the smallest of pullbacks in stimulus.

“Volatility is rising again, lowering the predictability of what may happen next,” said Ipek Ozkardeskaya, senior analyst at Swissquote.

The Bank of Japan dialed back some emergency pandemic-funding on Friday but maintained its ultra-loose policy and extended financial relief for small firms, cementing expectations it will remain among the most dovish central banks for the foreseeable future.

Adding to the caution are worries that rising Omicron infection rates mean a rocky few months for the global economy, although most economists think the damage will be much less severe than in previous waves of COVID-19 cases.

“Ordinarily, in the wake of a more hawkish (Federal Open Market Committee) outcome, yields would be expected to rise in anticipation of the Fed tightening cycle,” said analysts at Westpac.

“However, there are competing dynamics at present, with ongoing inflation fears sparking the Fed’s tougher rhetoric being offset by fears that economic growth will be derailed by Omicron in the near term,” they added.

The Bank of England surprised markets on Thursday by becoming the first G7 central bank to raise interest rates since the pandemic.[FRX/]