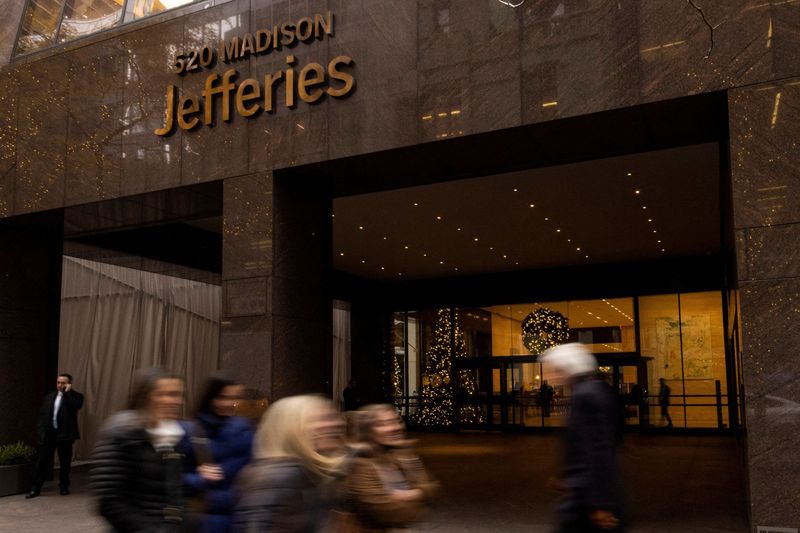 (Reuters) -U.S. investment bank Jefferies Financial Group has asked staff to work remotely until Jan. 31, according to an Instagram post on Monday from its Chief Executive Officer, in another sign that New York’s banking offices looked set for an empty start to the year as the Omicron variant spreads.

Banks and financial firms have been grappling with how to react to the latest variant and how to communicate to staff and retain workers amid the uncertainty. A number of other banks have asked staff to work remotely for the beginning of the year due to the latest surge in cases.

“Realistically, we do not foresee us all having a safe opportunity to be together in our offices until at least Monday, January 31st,” Jefferies CEO Richard Handler said in the message.

Jefferies had called its staff back to offices in October, but was forced to return to work-from-home in December due to a spike in COVID-19 cases. It had also re-imposed a mask mandate in its offices, irrespective of vaccination status.

Handler also said the bank will not host indoor group events or other functions, and that it believes only “the most critical business travel” should occur.

As concerns over the Omicron variant of the coronavirus grow, Wall Street banks, which have been aggressive in bringing employees back to offices, have been forced to rethink their plans.

Among other banks, Goldman Sachs Group Inc (NYSE:) said on Sunday it was encouraging eligible U.S. staff to work from home until Jan. 18.

Goldman was among the Wall Street banks that had pushed hardest to bring staff back into offices, and had been the last holdout trying to keep most staff working in the offices through the Omicron variant’s surge.

JPMorgan Chase & Co (NYSE:), which was also among those pushing staff to work in its offices, told workers last week they could from home for the first two weeks of January. However, JPMorgan said in the memo to employees that all staff are expected to return to offices no later than Feb. 1.

A source familiar with JPMorgan said on Monday that most of its staff have availed the option to work from home this week, although the bank did have some employees who have never worked from home as their roles need to be done from the office.

Citigroup (NYSE:) has also asked its employees to work from home during the first few weeks of 2022, a person familiar with the matter told Reuters late last month.

A source familiar with Bank of America Corp (NYSE:) on Monday reiterated that employees are encouraged to work from home the week of January 3 while the bank monitors the broader environment. The bank would be hosting several onsite booster clinics for employees across the country beginning this month.