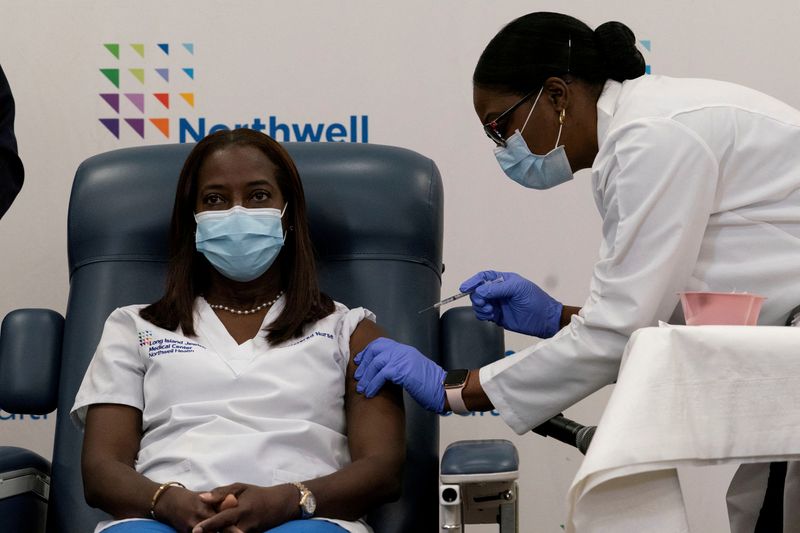 (In paragraph 16 corrects to read “vaccinated” instead of “unvaccinated”)

TAOS, N.M. (Reuters) -Nearly a year after COVID-19 vaccines were first administered in the United States, the country is returning to many of the hallmarks that defined earlier pandemic life: mask mandates, mass vaccination sites, crowded hospitals and a rising death toll.

Since then, more than 200 million others – more than 60% of the U.S. population – have gotten at least two doses of the Pfizer/BioNTech or Moderna (NASDAQ:) vaccines or one Johnson & Johnson (NYSE:)’s single-shot inoculation, according to the Centers for Disease Control and Prevention.

Despite that triumph of modern science, the country’s death toll continues to mount. Since the first dose was administered, nearly 500,000 more people have died of COVID-19, with the country expected to cross the 800,000 mark next week, according to a Reuters tally.

Both infections – approaching 50 million since the start of the pandemic – and deaths have been rising in recent weeks, especially as colder weather in northern states pushes activities indoors, allowing for easier virus transmission.

Resurging infections on Friday prompted New York Governor Kathy Hochul, a Democrat, to temporarily reimpose https://www.reuters.com/world/us/new-york-governor-says-masks-will-be-required-businesses-without-covid-19-2021-12-10 a requirement for face coverings inside businesses and venues that do not require proof of vaccination.

“We shouldn’t have reached the point where we are confronted with a winter surge, especially with the vaccine at our disposal, and I share many New Yorkers’ frustration that we are not past this pandemic yet,” Hochul said in a statement.

Mask mandates, which Republican governors mostly eschewed as government overreach, were a common infection-prevention tool for many Democratic governors during the pandemic’s worst surge, which began during the year-end holiday season of 2020.

Combating the virus has been complicated by its more aggressive mutations, including the currently dominant Delta variant and fast-spreading Omicron, which was first identified last month and has already been detected in nearly half of the 50 states.

The politicization of vaccines and hesitancy of many Americans to get the shots has also helped keep the pandemic going, usually with more deadly results, experts said.

In one of the Southwestern state’s hardest-hit hospitals in San Juan County, critical care beds filled up as fast as patients were discharged or died. Dr. Erin Philpott said eight of her patients had died in the last week, most of them unvaccinated.

“It’s sometimes hard to even feel because it’s so much and it’s constant,” Philpott said.

“You can see the rooms fill up right after, and you don’t have a second to pause and just process all this loss.” Philpott added that many of those dying from COVID-19 at San Juan Regional Medical Center were in their 30s and 40s.

Around 94% of COVID-19 deaths at the hospital are among the unvaccinated. “It feels like it’s impossible to keep seeing this and dealing with it,” said Philpott. “I think that’s why half the staff have gone.”

Nurse Patricia Thomas stood by a dead patient she had treated, a white sheet over his body, a picture of his family at his feet. His relatives made the decision to take him off life support. He was vaccinated. He had five children and 12 grandchildren.

Choking back tears, Sanders said: “We took the tubes out and let them hold his hand while he passed comfortably. Today was pretty hard because it’s my third one this week.”

‘FUEL FOR THIS FIRE’

As with other states with early high vaccination rates like Vermont, Rhode Island and New Hampshire, immunity has waned in New Mexico, pushing these states toward the top of rankings for new cases.

“The fuel for this fire, our case counts, is unvaccinated individuals,” New Mexico Acting Health Secretary David Scrase told reporters. “Our hospitals are in a really grave situation.”

Three out of four COVID patients in the state are unvaccinated, officials said. The same was true for Michigan, dealing with one of the nation’s worst outbreaks.

Shortly after the Omicron variant was detected in New Jersey, Governor Phil Murphy this week reopened one of the state’s previously shuttered mass vaccination sites in an effort to encourage residents to get booster shots.

Most of the large vaccination sites that states opened early this year to speed inoculations have closed.

The CDC estimates that about one-fourth of Americans have gotten additional booster shots so far. They have now been authorized for https://www.reuters.com/business/healthcare-pharmaceuticals/us-fda-authorizes-pfizerbiontech-booster-16-17-year-olds-2021-12-09 everyone age 16 and up.

Another symbol of the early pandemic, the contaminated cruise ship, also re-emerged this week.

On Monday, Norwegian Cruise Line (NYSE:) Holdings said a South African crew member suspected of having the Omicron variant was among 17 cases of the virus detected on a ship that disembarked in New Orleans over the weekend.

In March 2020 when relatively few cases had been reported in the United States, the cruise ship Grand Princess was held at sea for days before being allowed dock in Oakland, California. Its 2,400 passengers were sent into quarantine at military bases after tests revealed 21 positive cases of the coronavirus.